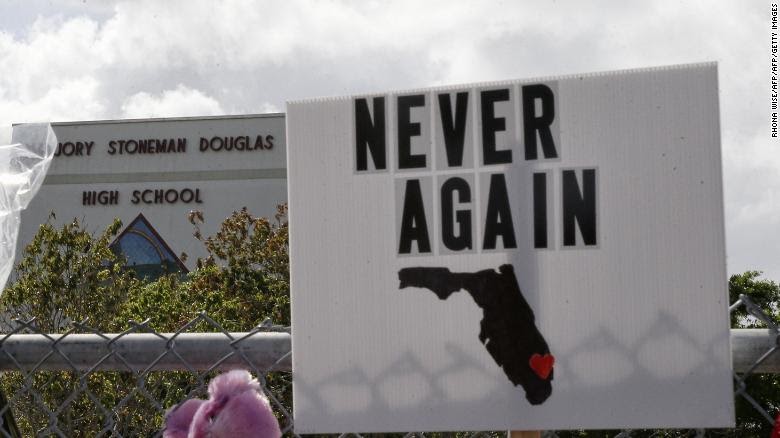 Washington (CNN)Max Schachter didn’t set out to become a political activist, but this week, he found himself on Capitol Hill and in the Oval Office, where he joined the administration in discussing new steps toward making US schools safer.

Friday will mark two years since a mass shooting rampage shook Parkland, Florida, and the nation. This week, the Trump administration, with the help of experts and some Parkland families, rolled out SchoolSafety.gov, a federal clearinghouse of information to help schools.

After his son, Alex, was senselessly murdered at Marjory Stoneman Douglas High School, Schachter put his life on hold, traveling across the country meeting with school administrators and lawmakers.

“I have three other children and I wanted to make sure nothing happened to them,” he told CNN between meetings on Capitol Hill Tuesday.

In his travels, it became clear to him that there were no recognized best practices for school safety, no uniform guidance for schools on door locks, access control and cameras, among other issues facing campuses.

Schachter worked with members of Congress and the White House to ensure his recommendation to create a federal clearinghouse to address school safety was included in the Federal Commission on School Safety’s report, released in late 2018.

This week, after collaboration between the Departments of Homeland Security, Education, Justice, and Health and Human Services, experts, nonprofit organizations, activists, some Parkland families and other stakeholders, the administration released a clearinghouse of resources to help schools assess their needs and create action plans, via website SchoolSafety.gov.

“This, in my view, is the most significant effort the federal government has undertaken to educate schools on how to protect their campuses and how to provide a safe learning environment,” Schachter said.
The Department of Homeland Security is working through partnerships with each state’s department of education to raise awareness of available resources, Schachter said.

The guide meets a reality that the country’s schools face: Since 2008, at least 372 of America’s K-12 schools, colleges, and universities experienced a shooting, according to data compiled by CNN.

The families and students impacted by the shooting at Marjory Stoneman Douglas High School have experienced enormous grief, and many have translated that to action.

One month after the shooting, some survivors led the March for Our Lives, protest events attended by hundreds of thousands across the country.

Schachter teamed up with the nonpartisan Stand with Parkland organization, which he founded with other Parkland parents, in his outreach to the administration.

On Monday, President Donald Trump hosted some of those families involved with SchoolSafety.gov’s conception for a meeting as the clearinghouse and website were formally announced by the Department of Homeland Security. The meeting was also attended by acting Homeland Security Secretary Chad Wolf, Education Secretary Betsy DeVos, high level officials from the Departments of Justice and Health and Human Services and a few Republican members of Congress, according to Schachter and Stand with Parkland president Tony Montalto.

The White House did not respond to CNN’s request for comment on the meeting.
The President sat in a yellow chair in the Oval Office and received a briefing from Wolf and DeVos. He spoke with the families, who exchanged stories about their loved ones, and thanked them for their advocacy, Schachter and Montalto said.

“He was very kind, he was empathetic. He told us he understands how difficult this is, only a couple of days away from the two year anniversary. He thanked us and he talked about how we have persevered even in this tragedy and have continued to move forward, to have something good come of this horrible situation,” Schachter said, calling Trump “deeply involved and committed.”

Montalto told CNN the group discussed some legislative measures, including the bipartisan Luke and Alex School Safety Act, which would codify and structure the school safety clearinghouse through future administrations and review federal school safety grant programs. It is named for Schachter’s son and Luke Hoyer.

“When we go into these meetings, we go into it with the idea of looking at the issue and finding answers. We’re not really interested in anybody’s politics. We’re interested in bringing people together to finding solutions,” Montalto said.

Montalto’s daughter, Gina, was killed in the shooting. He called the clearinghouse a success for the nation’s students and teachers.

“Millions of them will be able to be protected as we put aside our politics and beliefs and worked toward the goal of safer schools. Things are getting done because we’re driving people to the middle, to look past the partisan divide and find the answers,” he said.

There is always more that can be done, Schachter said, but: “This is a good thing. I’m not going to let perfection be the enemy of good. This is a really good thing that the President did and it’s going to provide a lot of guidance to schools they’ve never had before.”

In the immediate aftermath of the Parkland massacre, Trump heard emotional stories from people affected by the nation’s deadliest school shootings at a listening session, vowing to find a solution to the scourge of gun violence. Despite initial hints of compromise, nothing materialized, and the White House and Congress fell back into blame-shifting.

Last February, the newly Democratic-controlled House of Representatives passed a measure which would require background checks on all firearm sales in the country. Currently, under federal law, only licensed gun dealers must perform background checks for anyone seeking to purchase a firearm, which leaves the sale of guns between individuals largely unregulated. That bill has since been held up in the Senate.
House Democrats advanced a number of other measures through the House Judiciary Committee, but lawmakers have yet to find agreement on any legislative fixes. When Attorney General Bill Barr met with lawmakers to float a background check proposal, it was met with stiff opposition from some conservatives, and the White House later distanced itself from it.

For his part, Trump never made a decision about which efforts he wanted to endorse — an act that leading Republican lawmakers said they were waiting for before moving forward.

Talks with lawmakers over gun legislation appeared to bottom out in late September, about the time the relationship between Trump and House Speaker Nancy Pelosi of California soured over the impeachment inquiry.

Barr suggested last year that impeachment proceedings derailed any good-faith efforts to pass gun legislation.
“Right now it does not appear that things in Washington are amenable to those kinds of negotiations and compromises,” Barr acknowledged at an event in Memphis, Tennessee, in November.
Yet despite a bitterly divided Congress, a massive spending bill passed late last year includes $25 million for federal research into gun violence. The provision maintains the long-standing prohibition on any funds being used to advocate or promote gun control.

The administration did enact the Fix NICS Act, which incentivizes state authorities to report more data to the country’s gun background check system, in 2018. Congress also passed the STOP School Violence Act, which aims to provide more training for school officials and local law enforcement to respond to mental health crises, as well as, among other things, money to develop anonymous reporting systems for threats and deterrents like metal detectors and locks.

And the administration’s school safety commission released a report with recommendations in December 2018, including the clearinghouse announced this week. But critics were apoplectic when the commission opted not to focus on guns.

For parents like Schachter, this week’s steps are bittersweet.

“I was just a dad before this and I had never been to Washington, DC. And all the Parkland families are just trying to do something to honor their loved ones and make sure that everyone didn’t die in vain and to have something good come out of this horrible situation,” he said.